„…many refugees have organized themselves and became active against deportations.“ 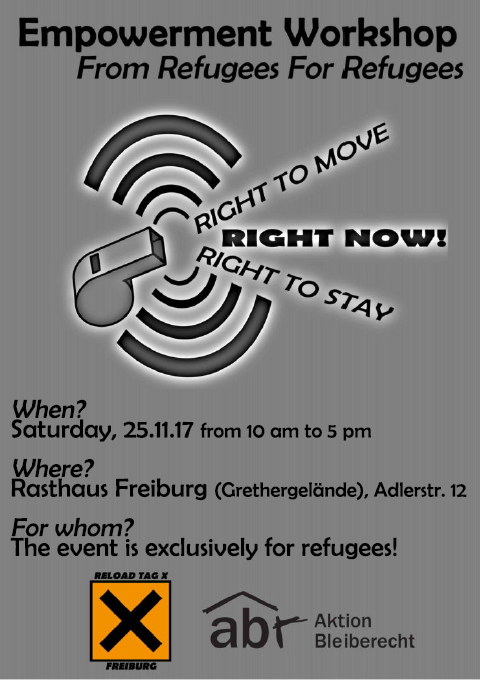 Flyer arabisch / deutsch / französisch / serbisch | When? Saturday | When? Saturday, 25.11.17 from 10 am to 5 pm | Where? Rasthaus Freiburg (Grethergelände), Adlerstr. 12 | For whom? The event is exclusively for refugees!

In Germany, refugees are facing numerous serious problems. They often lack access to medical care, education and work. Moreover, basic Human Rights, such as the freedom of movement, are strongly limited. In view of these injustices, many refugees have organized themselves and became active against deportations. They protested against precarious living conditions and demanded fundamental rights. The key for a successful protest has been solidarity and self-organization.
About the workshop
In this workshop, we want to share our experiences and discuss ways for refugees to become active in Freiburg and everywhere.
Who we are
We are a group of Activist refugees from Osnabrück, a city in northern Germany. We represent a self-organization called The Executive Committee of Sudanese Refugees in Ickerweg Camp (ECSRO) and the supporters group No Lager-Osnabrück.
Blocking deportations by self-organization
Deportations are a reality and the struggles continue. By now, deportations are not announced anymore. Therefore, it is not possible for supporters from outside the camps to intervene. In Osnabrück, refugees inside the camp got organized and prevented a number of deportations. They patrol with whistles at the camp gates during the night. When the police tries to execute early morning deportations, they whistle and wake up the whole camp. More than a hundred refugees approach the police cars – peacefully whistling. The police must leave without having achieved anything.
Feminist resistance
Nisreen, a Sudanese women refugee will shed lights on some women’s experience in fighting and resisting deportations. Further she will address other obstacles migrant women in Niedersachsen and some other regions are facing.
Information
A short video film from Osnabruck and digital slideshow photography presentation will be screened at the venue, followed by group discussions. In between, we make a break and have lunch together. There is also the possibility for childcare if needed. Of course, the event is free of charge!
We will talk in English and Arabic. We hope that participants can support the translation with other languages.
We are looking forward to seeing you